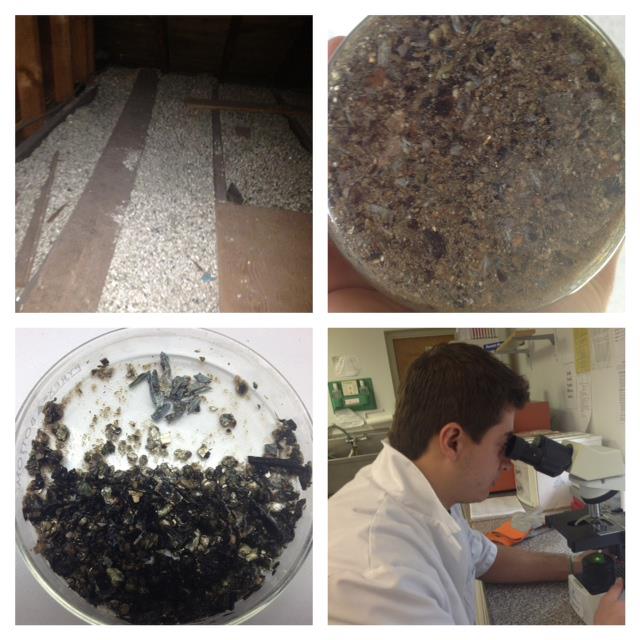 Vermiculite is a hydrous phyllosilicate mineral. It undergoes significant expansion when heated. Exfoliation occurs when the mineral is heated sufficiently, and the effect is routinely produced in commercial furnaces. Vermiculite is formed by weathering or hydrothermal alteration of biotite or phlogopite.

What does this mean, it’s a mineral that exist in the ground. There are many use for vermiculite, but today we are going to talk about vermiculite in attic insulation.

I am sure everyone knows the purpose of attic insulation, therefore we will be skipping that part.

The recommendations I have are to follow all sampling procedures. Collect three (3) samples from the bottom in three (3) different locations where the sample is located. All three (3) samples should be the size of a one (1) gallon “zip lock” bag and bring to my laboratory.

Now you might ask, what are we testing for? Asbestos!!! There are millions of pounds of vermiculite/asbestos that were mined in the United States. The Libby Asbestos site is located in Libby in Lincoln County, Montana. In the early 1920s, the Zonolite Company began vermiculite ore mining operations in Libby. Vermiculite from the Libby mine, bought by W.R. Grace in 1963, was contaminated with a toxic and highly friable form of asbestos called tremolite-actinolite kind of asbestos, often called Libby Amphibole asbestos (LA). EPA’s investigation determined LA to be present in air (indoor and outdoor ambient), vermiculite insulation and bulk materials, indoor dust, soil, water, animal and fish tissue and various other media within the Superfund site. Investigation and cleanup of the site is expected to be complete in 2018 with the exception of the former vermiculite mine and forested areas.

You can still find vermiculite in the local hardware stores, usually in the potting/plant department.

There are many reasons to test vermiculite. You might be buying or renting a home. Maybe, there are old plans around the house. Perhaps it was used under your pool or lining. Between the walls of your home, attic, even used as cooling insulation for machines such as furnace and boilers. Track lights and compressed wall board, I could go on for many ages.

You want, you need a consultant that has the experience and skills, knowledge and communications skill to explain to you the why, the do’s and the don’t’s.

Visit us today on the web: